Home » Blog » Who Pays For What At A Wedding?

Who Pays For What At A Wedding?

Few things in life bring as much stress and excitement as planning a wedding, and one of the top concerns is how to handle the finances. Newly engaged couples often have their hands full with things like guest lists, browsing venues and finding the perfect date, and in the excitement, it can be difficult to make sense of how to pay for it all. Fortunately, like all societal customs, there are expectations in place for who pays for what along the way.

It may be the bride’s big day, but that doesn’t make her exempt from financial expectations. While her family may share some responsibilities, there are some costs that the bride-to-be should expect to shoulder alone. Her future husband’s ring is one of them. Men’s rings weren’t always so common, however. In fact, many grandparents or great-grandparents never had a ring for the man to wear or added one later. During World War II, wedding rings became a reminder, tying a couple together. As the economy picked up after the war, men’s rings became a staple, and the cost eventually fell to the bride to bear. 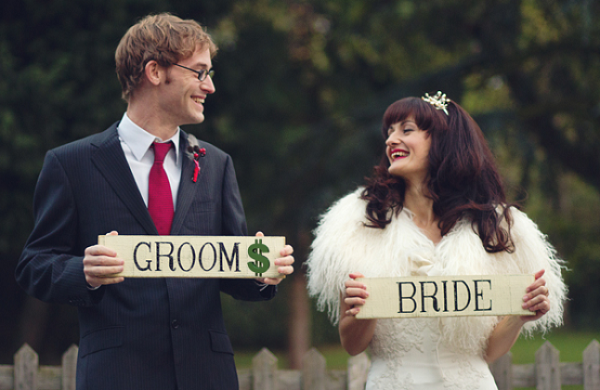 The bride is responsible for the wedding gift for her groom. She should also expect to pay for any treatments pertaining to her grooming along the way like getting her hair styled or a spa visit. While she may be called upon to help out her parents with arrangements for her bridesmaids, she should expect to pay for any gifts for her bridal party herself. The maid of honor and bridesmaids should handle any costs for the bachelorette’s party, but a more formal luncheon may fall to the bride.

Often the most important investment for the groom is the wedding ring. While this goes all the way back to the initial engagement, it also includes the cost of the wedding ring. The groom will also need to secure the marriage license and any associated fees for officiating the ceremony.

The groom is expected to pay for the honeymoon and all associated costs, and while his parents may pay for the bulk of any costs for his groomsmen, he may be called upon to assist with accommodations. The groom typically handles personal floral arrangements, paying for the bride’s bouquet, corsages and boutonnières. He is also responsible for providing gifts for his groomsmen.

While the bachelor’s party will be handled by the best man and groomsmen, the groom should expect to pay for a more formal dinner if there is one.

Traditionally, the bride’s family handles many of the costs, including the reception and ceremony.

These costs include food, decor and entertainment as well as any associated rental fees for things like furniture. The bride’s parents are also responsible for all floral arrangements for these venues along with wedding favors.

They are expected to handle all photography costs along with transportation to the wedding. Before the wedding, the bride’s parents pay for the invitations and attire for the bride. They may also be called upon to cover an engagement party or a formal luncheon for the bridesmaids. While these are the traditional expectations, not every couple finds these traditions equitable or even reasonable depending on their situation.

If resources are an issue, some couples may opt to forgo certain elements of the wedding or combine costs to share among members of the wedding party. For example, the couple’s parents may split the costs evenly, or the costs may be split three ways between the parents and the bride and groom. While these customs are typical in America, who pays also varies by culture. For example, Filipino weddings typically place all costs on the groom’s family. In Spain, these costs are handled by various sponsors, often godparents who are honored during the ceremony for their contributions. In Korea, the bride and her family pay for the cost of the wedding. However, with wedding costs frequently beyond the means of many families, a blending of cultures has occurred with traditions falling by the wayside.

Ultimately, how a couple pays for the wedding is a personal decision. While many couples would like to stick to tradition, those expectations are not always realistic, leaving couples in need of a compromise. Before sitting down to plan a wedding, couples should balance how important traditional customs are to them and their families. Most of all, couples should keep in mind that it isn’t who pays at the end of that aisle; it’s the fact that they’re walking it together that matters most.