10 Wedding Traditions Found Around The World The most special thing about the world is observing new and different traditions. In many cultures, weddings are a significant milestone that spark great celebrations. Although some wedding traditions, such as bouquet throwing and wearing white dresses, can be seen throughout various countries, each culture also has it’s own twist on the fun festivities. To learn more about traditional weddings, there are many books, documentaries, and even television shows that expose cultural wedding customs (though sometimes dramatically). The following are 10 interesting wedding traditions from around the world.

In India, a common wedding tradition is the use of mehndi, often known as henna. Before the wedding ceremony, a day is set in which mehndi is applied to the hands and feet of the bride and sometimes the groom. The bride’s designs are elaborate and detailed. The mehndi design is symbolic of the future of the marriage; it is believed that the darker the color that is left on the skin, the more love that the bride will receive from her husband and mother-in-law. Mehndi is not only symbolic, but is also used as a medicinal herb, as it is thought to cool the body, relieving stress leading up to the wedding. The mood of the mehndi-applying ceremony is festive and happy. This tradition is found both in India and parts of Pakistan.

In China, tradition is an important part of wedding ceremonies. Throughout the wedding day, it is common for a bride to change three times, and sometimes more. The first dress is worn for a special tea ceremony that takes place in the morning with the groom’s relatives. The bride then changes into dress two for the actual wedding ceremony; this dress can be either a traditional red or a Western-style white. A third dress is then donned for the reception. This dress is generally a red silk gown, often with a phoenix embedded on it, symbolic of the female partner. Some women also choose to change several times throughout the reception. Following an old German wedding tradition, after the ceremony the married couple and their guests move outside where a large log is placed on a sawhorse. The bride and groom saw the log in half together, symbolizing the couple’s first tough task and their ability to accomplish it together. Another interesting German wedding tradition has the bride and groom create a wedding newspaper with pictures, stories, and even articles about the couple. This newspaper is sold at the wedding reception and the profit is used to help pay for the honeymoon. 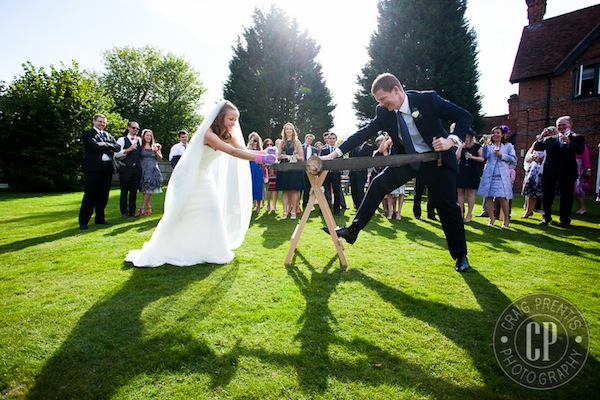 In traditional Czech weddings, the bride and groom are covered in a large cloth during the reception. The couple then shares a bowl of soup, or in more modern tradition, a loaf of bread. This custom signifies unity, cooperation and equal part give and take. Also in the tradition of expressing unity, a plate is broken at the feet of the bride and groom and together they pick up the chips. There are two beliefs that guide this custom: one allows that the chips will bring happiness to the bride and groom and the other is that the couple is showing joint cooperation, foreshadowing a harmonious marriage together. In traditional Norwegian weddings, one of the customs that stands out most is the attire of the bride and groom. The bride generally wears a white or silver gown, which is called a brudekjole. With it, she wears a gold or silver crown (or krone), which has small spoon-shaped bangles hanging from it. It is believed that the sound made from the bangles keeps evil spirits away. Traditionally, the groom wears a handmade woolen suit, which is called a bunad. Bunads can be worn by either men or women and symbolize the area of Norway to which the wearer is most attached. In modern weddings, however, the bride and groom generally opt out for a more Western-style white gown and black suit, although some grooms will still choose to wear the traditional bunad. Many American wedding customs have been adapted from Victorian-age European traditions, however the history behind American wedding traditions does not generally carry much significance in the culture. Today, the bride throws a bouquet of flowers to the single women attending her wedding and the first to catch it is believed to be the next in line to get married. In olden times, however, the bride used to throw herbs because they were believed to ward off evil spirits. Additionally, it is an American tradition to have the bride choose the color or style of the bridesmaids’ dresses, who stand beside her during the ceremony. While America and England share a lot of the common wedding traditions, there are also some significant differences. For instance, traditionally in English weddings, it is custom for guests to wear large hats. Today, the use of hats at weddings is generally preserved for celebrating a royal family, in which the hats tend to be large and varying in shape and dimension. Historically, these hats symbolize one’s class status. In a way, these hats are a substitute for crowns or tiaras seen in many other cultures. Another British tradition allows young girls to take part in the bridesmaids culture; while bridesmaids in America tend to be around the age of the bride (generally friends of the bride), in British weddings the bridal party often includes young family members. A Malay wedding is full of age-old traditions and customs, from the initial akad nikah ceremony in which a contract is signed to the end of the wedding ceremony. One of the highlights of the festivities is during the bersanding ceremony, in which the newlyweds sit on a dais while family and friends approach them, gently sprinkling yellow rice and scented water on the couple. This custom signifies good blessings. After the ceremony, the guests attend a feast, which is called makan beradeb, in which the couple feed one another. While some (generally Westernized) customs have a flower bouquet toss for the single female guests, Peruvian weddings have their own twist to the same concept… In between layers of the wedding cake, there are ribbons with charms attached at the end. Before the cake is cut, single girls and women grab a ribbon and pull. The one who pulls out the ribbon with a fake wedding ring is believed to be the next to get married. Peruvian weddings are traditionally packed with music, dancing and vibrant colors, celebrating this new marriage, and in a way, celebrating life. In very traditional Peruvian weddings, there may also be a despacho– a ceremonial offering to Mother Earth (Pachamama) and the Mountain Spirits (Apus). In the Philippines, weddings are considered very festive events that one’s entire community comes together for. While the ceremony tends to be quite serious, the reception is full of fun celebrations with drinks, food, music and dancing. As Filipino weddings largely involve family and symbolism, the couple has “sponsors” which are generally close friends and family or godparents of the couple. Along with giving speeches, the sponsors (or sometimes the ring bearer) are in charge of the Arras, which is a pouch or box with 13 coins given to bride from the groom as a pledge to financially support their new family. The acceptance of the coins symbolizes the bride’s promise to build a loving home. Every culture has it’s own interesting traditions, which defines it’s celebrations and festivities. Weddings are the ultimate celebration in so many traditions and are therefore a special way to observe cultural customs. Need inspiration for the perfect color scheme? Choose from these